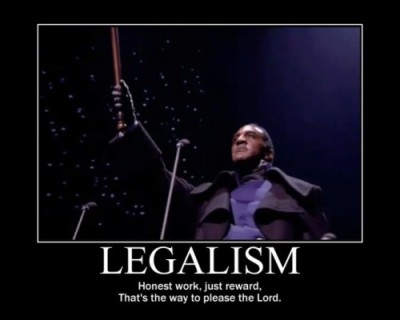 The Appeal of Legalism

The Galatians did not wake one morning with a surprise case of spiritual apostasy— infected with some unseen virus. They had witnessed not only conversions, but also miracles in their midst (see Gal. 3:5), yet they took to legalism like trout to PowerBait. Why did the Galatians, who had “begun in the Spirit” (Gal. 3:3), so readily take the bait of an alternate reality? What made them bite?  There are at least six ways that performance-based religion, including mandatory Torah observance,  appealed to the Galatians and continues to appeal to believers in every generation.

Why is Legalism So Appealing to “Christians?”

There are at least six reasons that legalism is so appealing. There may be more. What follows here is abbreviated from our book. For a full treatment of each of these, please refer to the book reference at the end of this blog.

THE APPEAL OF CULTURE

The inhabitants of Galatia were a passionate race, culturally prone to fickleness.3 The Judaizers could not accept that Gentiles were coming into the privilege of covenantal relationship with their God, free of Judaic laws and practices. In the mind of the Judaizers, salvation belonged to them. They were the custodians of Torah, the Covenant, and the God-sanctioned administrators of what was holy and what was not. Circumcision did not just identify Israel as the covenant people, but it distinguished them ethnically and culturally as well. The tendency to conform our image of God and His expectations for us (and others) to the image of our culture is imperceptibly strong. It is also the root of idolatry and the appeal of legalism.

In Galatia, the culture of the Judaizers had the same intimidating effect as historical European culture or American culture today. The Gentiles, recent converts from paganism, had no history or background with Yahweh, His covenants, and His precepts. Then one day, a group of Jerusalem brethren walk in, fully dressed in their ethnic and rabbinical garments, perhaps carrying a Torah scroll or some other scrolls under their arms. The appeal of the culture would be psychologically overwhelming and, as such, was a tremendous influence allowing their legalistic doctrine to begin to take root in the hearts of the Galatians.

THE APPEAL OF APPARENT AUTHORITY

How do we know that the appeal of authority was at work in Galatia? Paul spent the first chapter and a half of his letter to the Galatians vindicating his credentials, his call, and his authority. The credentials Paul bore were not the endorsements of ecclesiastical council, but the revelation of Jesus Christ, the marks in his body, and the character of Christ (see Gal. 1:1; 11-17).

Legalism is often brought into the church by means of impressive biblical authority, charm, persuasive personality, and giftedness. Those with history and experience in God can unconsciously intimidate the young and the inexperienced. A lie, untruth, or subjective opinion—if repeated enough with conviction, authority, and passion—has the power to shape people’s lives. Every two-bit tyrant and dictator in history has known this and used it with great effectiveness.

The more potent our personality and the stronger our base of biblical “facts,” the more vital it is that our message, life, and ministry be “on track.” We must judge a message or doctrine on its substance, not on the apparent authority of the one presenting it or the persuasiveness of the presentation. Failure to do so becomes the foundation for unrecognized legalism

The appeal of authority is a powerful means by which legalism and aberrant doctrines of many kinds subtly work into the Church. The remedy is to major on majors—the sound exposition and presentation of the Person and work of Christ, His cross, believed in and applied—and to stay away from marginal pet doctrines of gifted and persuasive people.

THE APPEAL OF IDENTITY

Urban youth workers know that the desire to “belong” is a powerful force of human psychology—far-reaching in societal impact. Our streets are littered with angry young men in gangs. Indoctrinated by the public schools with the nihilistic philosophy of macroevolution, young people live every meaningless day of their lives in a society characterized by fatherlessness, relational abandonment, isolation, materialism, and family breakdown. Although distorted, a gang provides a sense of purpose, place, structure, authority (even a gang has a leader) and cause—more than our schools and society offer. Even if personal treatment becomes abusive, the gang member will gladly endure it rather than lose his or her sense of identity with the group.

Similarly, a believer will often endure a toxic church environment because, though poisonous unto death, it provides a place of identity and human relationship. The spiritual substance of the life of Christ is regularly sacrificed by the Church on the altar of humanity’s primal need for identity.

IT’S AS EASY AS ONE, TWO, THREE

In order for any group of people to achieve a large goal, only three simple ingredients are necessary:

Give a boy a uniform, flag, slogan, and a cause, and you have reached not only today’s boy, but made tomorrow’s man—for better or worse. Lord Baden-Powell understood this when he founded the Boy Scouts. Our military operates by it. Hitler used it for the Hitler Youth, and Lenin used it with the Red Youth. Trained individuals awakened to a cause are a mob. Trained individuals who share a common identity are an army. An army can easily scatter a mob.

Satan is content to let believers in a local church be a collection of trained individuals working for the Lord’s cause or the local church’s vision. What he will resist is discovery of the essential and primary ingredient of their individual and corporate success—their identity. Successful Kingdom advance begins by recognizing, believing in, and acting upon our identity in Christ. If satan can obscure the believer’s identity, or cause the believer to embrace false religious alternates to his or her identity, the church will just be a mob, not a conquering army.  Without identity, the cause is lost. Trying harder and working more will not compensate for failure in identity.

THE APPEAL OF SCRUPULOUSNESS

Some of the well-known mass-market retailers often conduct coloring contests for children in support of charities. A standardized picture is given to entrants, categorized by age, who then color the picture and resubmit it for scoring. The children who do the best job of staying within the lines win the prize. This is fine marketing and promotional strategy but it is lousy Christian theology and practice. Many believers’ personal experience with God is like a coloring contest: God has given us the outline picture—the Bible. It delineates all His expectations—determines the lines I must stay within. If I just do my best to stay within God’s lines, to try really hard, to color really well, maybe the great Judge will score me a winner and I will be rewarded both now and in the hereafter.

In the beginning of our faith, we may understand theologically that we are justified by faith, but after conversion it is common to spend the bulk of our life living as if the rest of Christianity is about how good a colorer I can be. His Kingdom does not go forward based on performance and scoring. It advances by death and resurrection. His expectations for proper behavior have never changed; the source of life in the believer has. I am not called to live scrupulously, but abundantly.

The Judaizers were extremely sincere and religiously scrupulous folks. They were not “bad people.” They were just wrong people. Their message to the Galatians was not— “depart from the living God, turn and serve other gods.” Rather, their teaching required that the Galatians could and should get closer to God by doing more to please Him than Christ had already accomplished on their behalf. They appealed to the Galatians to live more scrupulously for God by adhering to the Mosaic law in order to earn the right to claim the status of sons and daughters of God.

THE APPEAL OF SUPERIORITY

The Judaizers appealed to the universal human desire to set oneself above others. By demanding of the Galatians external observances, they were saying: “If you do these things, then you will be just a notch above the rest of the believers in the world. This grace thing is ok, but if you really want to be spiritual, like we are, you must do these things.” Legal religion always appeals to the pride of possessing superior knowledge, self-achievement, self-vindication, and self-justification. Legal Christian religionists will always be hard on others because deep down they really believe they are better than others through their own efforts: efforts of holiness, study, or charismatic manifestations. If I can obey nine of God’s requirements, and you can only keep seven, I am more advanced, more spiritual than you are and I can use my advanced standing to dominate or control you. A legalist believes that by their superior performance that they somehow have leverage with God and over others.

THE INFLUENCE OF SUPERNATURAL OCCULT POWER

Paul explodes in an insulting rhetorical outburst in chapter three. He calls the Galatians fools.  The Greek word means to be completely lacking intelligence. Perhaps a modern English equivalent would be: Idiots! Not exactly a seeker sensitive approach to ministry! After that heart-warming and endearing phrase, he then proceeds to tell them that they are not only idiots, but also the blind victims of occult powers.

Bewitched literally means “to come under the spell of the evil eye.” For Semites or Mediterranean people, light and darkness were believed to be physical substance. The eye was thought to project either. For instance, the eyes of the blind were not viewed as incapable of receiving light, as we would think, but considered to actually emanate darkness. The eye was linked like a pipe or channel to the soul. Therefore, in their minds, what was in the soul could come out of the eye. This was not just a quaint metaphor. Good or evil “soul-stuff” was believed to emanate from the eye. In one of his poems, Theocritus (Greek) used a word (báskanos) meaning to destroy with the eyes. To cast the evil eye brought demonic powers out of the soul and projected them on another person.

The spiritual energy of legalism is demonic. The antichrist’s last day strategy is to accomplish with the allure of performance-based religion what he could not accomplish through the centuries by persecution: corrupt and destroy God’s true temple, the Church, by Christ-less religion in the name of Christ. Appealing legalistic religion and other lesser distractions, which oppose and exalt themselves against the preeminence of Christ, will attempt to move believers away from pure love, devotion, and service to Him, His Church, and the world. The love of many will wax cold. Christ plus something is nothing. Christ plus nothing, is something!

This blog is an excerpt from our title: The Silent Killers of Faith: Overcoming Legalism and Performance-based Religion  It is available in all formats at www.stevecrosby.com.