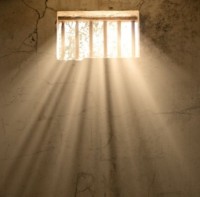 A Night in Jail in the Presence of God

Recently, I had the privilege of spending an hour and a half in the manifest presence of God. What made the experience so unique is all the things that many of those reading this have been conditioned to believe are necessary for such a thing to occur in a meeting (a good crowd, prolonged praise and worship, sermon/ministry of the “word,” prayer, altar call, heart wrenching repentance, whatever,  were all absent. How can that be possible?

I was ministering at a jail with another brother. We were responsible for a “Bible study” at the facility. When the correction officers made the call to the units for “Bible study” time, our hearts sank somewhat when only one inmate came into our room. We had no history with this person.  We determined to go where the Spirit would go, and if He wasn’t going anywhere that night we would shut’er down and go get a coffee with no guilt!  My friend started the time with a profound and deeply theological 😉 statement addressed to the inmate in attendance:

“Hi, we are glad you are here. What is your story?”

An hour and a half later, my friend and I left weeping and in awe, as we had been privileged to be in the presence of vibrant, pulsating, throbbing, supernaturally empowered, transformative new life in a follower of Christ, 21 months old in the faith. My friend and I had not said a word for ninety minutes. We sat and listened as the brother simply talked of Jesus and what Jesus had done, and was doing, for him since coming to faith.

I have decades of prison ministry experience. I am alert to jailhouse conversion stories that are sketchy. This was the real deal: radiant, humility, gentleness, miracles of provision, miracles of providence, evangelism without Bible thumping, transformed behavior, over-coming faith in a hostile environment, and more.

After that evening, both of us realized how rare genuine new creation new life can be, sadly so. It was encouraging and at the same time saddening to realize that we had to come to a jail to experience what should be normative in our so-called churches, but is in reality, often as rare as cats flying.

We also realized how, in our best and misguided efforts “to minister for Jesus,” we are often the biggest obstacle in a room to the very things we beg Jesus to do in our meetings. He would do them more often if we would get out of the way and let go of our religious fetishes, addictions, and traditions that we erroneously believe are essentials of what should occur in a “meeting.”

What is the lesson?

Both of us are “highly qualified” to “minister.” I have a Doctorate and my friend a Masters in Divinity. We both have literally decades of ministry experience. We faced a choice of pressing forward with a “class of one,” or cancelling the “Bible study” because there were not enough in attendance to listen to us “masterfully exegete and expound from the scriptures.” I was so thankful that both of us have been delivered from a compulsive need to be listened to. We ended up being the recipients of ministry, throbbing with the vitality of heaven.

Those of us with teaching gifts must learn that sometimes the best teaching we can do is none at all.

We can be so conditioned to the “ministry of the word” (as in scripture) that we never allow the Word (as in Jesus) to minister.

Insecurity in professional clergy is epidemic. Ego is epidemic. It masquerades under “people need to be taught sound doctrine,” when in reality it is nothing other than an unresolved need in the one doing the talking to be needed, validated, and depended upon in an unhealthy way. No real “equipping” for works of service occurs under the “ministry of preaching and teaching,” but rather eternal dependency and infancy. After all, a paycheck is usually hinging on being listened to.

It would take too long to recount here all the details of the amazing evening, but I will relay just one story. In this particular facility, the inmates are inundated with Bible studies of every color and stripe, virtually every night of the week. The brother had been attending all of them due to his hunger, including almost two years at a Jehovah’s Witness Bible study. During our time together he said:

“The Spirit of God has been telling me that something is wrong in that Bible study and I won’t be attending any more.”

My friend and I made eye contact and restrained ourselves from laughing out loud. Here is a new convert, 21 months old in the Lord, who, with no “doctrine classes,” no long theology debates, no dependence on a “minister to teach him the truth,” no sermons and teachings on the Trinity and Arianism,  no arguments, etc., has been led into Truth by the One who said He would do so if we would let Him.

It works. Jesus really is alive from the dead and the Holy Spirit has not gone into retirement because we now “have the Bible to lead and guide us” . . . sigh.

Of course there is a time and place for disciplined and formal instruction!

However, sermon/lecture/classroom/sanctuary/passive audience is an overdone cultural assumption motif, not a biblical mandate of what that should look like. The point is, for 500 years within Protestantism, that motif has been given disproportionate place and disproportionate emphasis because those who control things in mainline Evangelical Protestantism are for the most part, pastor-teachers. There is more to the kingdom and experiencing the presence of God than the singular expression of that gift ad nauseum, as our experience in a jail with a new convert so ably demonstrated.

So, perhaps some of our straining and begging prayers for revival and more of the presence of God would be realized if we simply would stop what we are so used to doing and let Jesus really be the Head of His church. A friend of mine has succinctly defined “revival” as no more complicated than: “Hear Jesus, do what He says.” Simple and challenging at the same time.

Perhaps the “more of God,” and “more of you Jesus,” “send us fire, send us rain, let the river flow, let the fire fall, come down, come up, come in, come out, put your right foot in and turn it all about, do the hokey-pokey” nonsense that we beg for in endless modern worship choruses in painfully long and dead “worship services,” would be realized if we quit singing about it.

Maybe the most effective spiritual technique, the most powerful method, the most key element for an encounter with the manifest presence of God, isn’t “doing spiritual warfare in the heavenlies,” but rather to simply shut up long enough to allow Jesus to speak. Try it every now and then. I am confident you will experience what we did that glorious night in jail.

4 comments on “A Night in Jail in the Presence of God: 'Power and Presence Where Jesus Said He Would Be'”