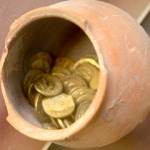 The events of the day of Pentecost are like a two-sided coin: that which is seen and experienced on earth is in response to heavenly activity. The heavenly action is rarely discussed when the topic of the Pentecostal outpouring comes up. So much focus has been placed on a specific manifestation (speaking in tongues) that the richness of our full inheritance in Christ is often overlooked. What precipitated the Pentecostal outpouring? What is it in essence”? What did the believers receive as a result? What did God receive? What does it mean to us today?

Jesus specifically said that the outpouring of the Holy Spirit would be contingent upon his ascension and glorification.[1] His ascension is identical with His enthronement when He sat down at the right hand of the Majesty on high.[2] After His resurrection, He told Mary: “Do not keep clinging or holding me”[3] (with motive to affect Him). There was something yet to accomplish in the heavenlies. It was not possible to pour out His spirit in John 20, as Christ had not yet died and not yet ascended. Instead of being limited by His mortal flesh in time and space, He passed as a man into the life of God who is Spirit and He released this Spirit into the earth. The baptism in the Spirit is the outpouring resulting from His enthronement. He received resurrection life, which is not Adam’s life restored, but a new a far more wonderful life conferred by God, which contains His fullness.[4] The arrival of Jesus of Nazareth into heaven was the arrival of such a One as had never been there.[5] There had never been such a thing as a sinless man resurrected from the dead, one with the Father.

In Acts 2:33 Peter refers to the heavenly activity associated with Jesus’ glorification on the day of Pentecost as something being “shed forth.” The meaning is an outpouring, a pouring forth of a substance—a literal transference of “substance.” In Acts 2:36 Peter stated: “God hath made that same Jesus whom ye crucified both Lord and Christ.” The word “made” (Gr. epoiesa) means to endow a person with a certain quality, to appoint, or constitute. Jesus was always Lord and Christ, but in His ascension, He received an investiture as king. In the context of Peter’s Pentecostal sermon, quoting Psalm 110, he appeals to the resurrection from the dead as the means by which Christ is in receipt of David’s throne as king, which resulted in the outpouring of the Spirit being witnessed.

In Acts 13:32 Paul also quotes Psalm 2 in the context of resurrection as the fulfillment of the promise made to the Father (the patriarchs, David, Abraham, etc.). For Paul, the “begetting” of the Son in Psalm 2 was the begetting of Jesus from the dead (the first fruits of the resurrection) and His investiture as king, not in His generation from Mary naturally.

In Hebrews 5:5-6 the apostle quotes Psalm 2 and Psalm 110 (two of the most important Old Testament verses for New Testament doctrine) and states that Christ was “made” (Gr. ginomai – became, came into being) a priest after the order of Melchizedek.

Melchizedek (Genesis 14) was priest of the Most High God and King of Salem. He is the only Old Testament character upon whom both the office of king and priest are recorded. He met Abraham, the heir of the promises of God, as he was coming back from a fight with those who had the righteous seed in bondage. In the Old Testament economy, combining the office of king and priest was prohibited.[6]

There was something unique in the history of the cosmos in Jesus’ heavenly activities and ministry. A resurrected God-man was seated on the throne of the universe combining the offices of king and priest after the order of Melchizedek in the power of an endless life.[7] It is the overflow of Jesus’ literal coronation anointing as Lord and Christ, king and priest after the order of Melchizedek. Failure to integrate the Spirit outpouring into Jesus’s total work will produce unnecessary exegetical difficulties, as well as an impotent practical life

The baptism in the Spirit is the Spirit of Christ’s glorification. The two are inseparable. The very spirit of God’s own Son, raised and glorified, is granted to the believer. The baptism in the Spirit is the earthly reflection of Christ’s exaltation into heaven: the participation He gives to His friends of the glory He now has with the Father, as the Son.[8] It is the consummation and realization of the glory given to the disciples positionally in John 17. It is a bursting forth, evidence of the glory of the new relationship Christ has wrought for the believer with the Father. The glory of Christ shared with believers is the inhabitation, inworking and outworking of the Spirit of sonship.

Jesus’ glory was that God truly resides, acts, and works in Him. It is the same for the believer. The glory of God manifested in the believer through mighty works. It is in the power of resurrected life that much god-glorifying fruit is born. The purpose of supernatural works performed through the believer is to return glory to the Son, just as Christ glorified the Father through supernatural manifestations.

In the ages to come the glory will be fully manifested throughout the entire universe[9] in unhindered consummated union. Charismatic continuation is part of the divine progress in the revelation of the glory of God to, in, and through humanity. Edward Irving provides an excellent summation:

It [Spirit baptism] is an act of Christ’s whereby he doth give to his church the Holy Ghost to dwell in them, and to work in them all the joy and consolation, all the word and power, which resided in himself; to the end that, in obeying the motion of the Holy Ghost within us, we may shew forth in the world, and to the world, the goodness of God, and the power and glory of the son of Man, who sitteth in God’s throne, and exerciseth all the power of the Father in his presence. [10]

Everything Jesus did on earth is intensified through the baptism in the Holy Spirit. Jesus’ compassion and wisdom have not ceased, rather intensified through the outpouring of the Holy Spirit. The effect of the Spirit’s outpouring is not the diminishing of supernatural power, but the intensification and magnification of everything done previously in the power of the spirit of the Lord of the pre-Pentecost era.

What the disciples accomplished during Jesus’ earthly ministry was done by the power of the Spirit of the Lord of the old order. The baptism in the Holy Spirit is the power of a new order: resurrection and endless life. As Christ’s successor in the church, the Holy Spirit continues Christ’s ministry. Christ’s offices of Healer, Deliverer, Prophet, Priest, Wisdom, and Miracle-worker have not ceased, but have continued through His body, the church of all ages, to demonstrate every facet of His glory, not only in the degree that Jesus of Nazareth did, but in greater degree because the power of resurrection is loosed in the earth. F. F. Bosworth provides a provocative question for Cessationists:

Why would the Holy Spirit, Who healed all the sick before His dispensation began, do less after He entered office? Did the Miracle worker enter into office to do away with miracles during His own dispensation?[11]

In each child of God the power of endless life is working.[12] The promise of the Holy Spirit in His Pentecostal fullness of power comes to bring the life of the church and each believer, into harmony with the will of the Father and the work of the Son . . .[13]

The very demonstration and power of the Holy Spirit which Paul said made his preaching effective is not only uncultivated and unknown by pastors and teachers, but more lamentable, those who claim to stand the most strongly for the truth of all that Paul wrote, deny and decry any thought of a manifestation of His power such as he experienced in his day. Need any more than this be known to explain why the church of Christ today is fallen and apostate condition?[14]

The rebuke applies equally to Cessationists and Charismatics: Cessationists because of complete denial and Charismatics for correct theory, but low realization and terrible application. The ministerial purpose of the baptism in the Holy Spirit is not so the believer can speak in tongues, display a gift and carry on in a meeting. The baptism in the Spirit is to be the extension through all the earth of a people who are filled with the power of His resurrection life and who express His glorified life, of which charismatic continuation is a legitimate part! Spirit baptism is to lift the church into the same realm of supernatural ministry that our great king-priest is in. Since it is the overflow of His king-priest anointing, it must reflect the same qualities of kingship (authority over spiritual powers, not our own rank, there is only one King) and priesthood.

Neither the traditional Evangelical view, nor the standard Pentecostal view of Spirit baptism is sufficient for me.  The truth is: God is “out” in totality, indwelling His church in totality, and His powers are demonstrated in totality. This includes all charismatic manifestations through His many-membered body.

[3] Greek – hapton – present imperative active, continuous or repeated action; handling of an object as to exert a modifying influence upon it or oneself.

[6] The priests were to be Levites, the kings of Judah, descendants of David.

[10] Edward Irving, The Day of Pentecost, or the Baptism with the Holy Ghost, 1831; quoted by Strachan, Pentecostal Theology, 132.

8 comments on “Spirit Baptism and the Indwelling: 'The Glory of God in Earthen Vessels'”